Florida Road Races is a family-owned and operated race management company that organizes running events in the Tampa Bay area. Founded in 1979 by Chris Lauber, our current mission is to offer the most “runner-friendly” races while promoting a healthy, active lifestyle, showcasing our beautiful beach communities, and generating a positive economic impact.

Starting with his first Jet Ski race in 1979, and just nine local racers competing on a company-owned Jet Ski, Lauber was a pioneer helping to grow that sport over our 120+ Jet Ski race promotion career. The sport peaked in the early ’90s with 275 racers, national-level sponsorship from Anheuser-Busch (5 years), ESPN coverage (5 championship races), and more than $1,100,000 awarded in prize money. Chris Lauber’s 20-year career resulted in him being inducted into the International Jet Ski Hall of Fame in 2011.

Lauber transitioned to road races on January 23, 2000, with the creation of our Gulf Beaches Marathon, adding the Holiday Halfathon in December 2002, our Halloween Halfathon in 2009, our Florida Beach Halfathon in 2010, and our Ft. De Soto 15K in 2015.

Starting with nothing more than a blank piece of paper nearly 20 years ago, a vision, and tons of hard work, we now host five races per season, all in Pinellas County, with a current average of 1,200 finishers. We hosted more than 6,000 total finishers each year, with runners coming from all corners of Florida, 45 states, and 15 countries.

Our mission is to challenge athletes to achieve goals they once thought impossible, such as completing their first 5K, setting a personal record, or finishing a half marathon or marathon.

Our goal is to provide affordable, well-organized road races that offer the highest customer service and satisfaction.

We currently do that by offering athletes:

We live by the motto “People over profits” with the belief that treating athletes fairly will keep them coming back, ultimately building our races. Besides, it’s the ethical, morally-correct way to build long-term friendships.

E-mail: [email protected] or the form below. 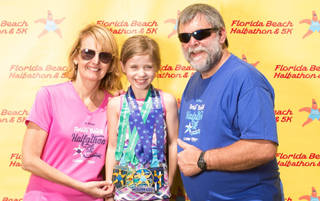 “I really appreciate the quality of events that you put on for the Bay Area . . . the courses are scenic and easy to follow, the volunteers are super supportive, and the medals are AWESOME! I look forward to participating in your races for years to come.”
– Emily Arends, Clearwater

Virtual Run
Options
For All
Our Races